Empire Robotics, Inc. was founded in 2012 to commercialize the jamming-based robotic gripper technology developed at Cornell University and the University of Chicago. Our mission is to help bring manufacturing jobs back to the US and to reduce the complexity and energy consumption of manufacturing around the world by providing innovative robotic grippers and automation components. Our VERSABALL® grippers are high-functioning end effectors that enable more agile robotic manufacturing processes with a single inexpensive tool.

BILL CULLEY (President) co-founded Empire Robotics after spending four years in robotics and developing technology-based startup companies. With a unique background in robotics research and product launch strategy, Bill has positioned Empire Robotics as a disruptive robotic gripping and work holding tool provider in the industrial automation industry. Prior to Empire Robotics, Bill served as COO at StormBlok Systems, shaping the operations and go to market strategy for this high tech building materials company. Before StormBlok, Bill spent two years as a partner in Finlo LLC designing and building solar electric systems for commercial and residential properties. Bill began his career at Oliver Wyman, where he served internationally as a management consultant to Fortune 500 companies. Bill holds an BS degree in Mechanical Engineering and a Masters in Mechanical Engineering from Hod Lipson’s Creative Machines Lab at Cornell University, and a MBA from the Johnson School at Cornell.

NADIA CHENG (Director of Research & Development) received her Ph.D. and M.S. degrees in Mechanical Engineering from the Massachusetts Institute of Technology, and a B.S. degree in Aerospace Engineering from the University of California, San Diego. At MIT, Nadia designed and analyzed tunable stiffness mechanisms, including a jamming robotic manipulator. She was also a National Defense Science and Engineering Research Fellow, has worked at the MIT Media Lab, and has held internships at various government and private institutions. Nadia has publications in robotics, air traffic management, tangible user interfaces, and nature-inspired cocktail garnishes, and has also worked in areas including medical devices, assistive technologies, and 3D printing.

PATRICK DINGLE (Director of Engineering) brings over ten years of robotics development experience to the team. Prior to Empire, Patrick was one of the first ten employees at Kiva Systems, the mobile warehousing robotics company that was acquired by Amazon in 2011. At Kiva, Patrick led the mechanical design efforts on several generations of Kiva’s mobile robots. Patrick received an M.S. in mechanical engineering from ETH Zürich (The Swiss Federal Institute of Technology) specializing in feedback control systems and a B.S. in mechanical engineering from Cornell University. While at Cornell, Patrick founded and mentored a FIRST Robotics Team for a local high school and was a mechanical team lead on Cornell’s world champion RoboCup autonomous robotic soccer team. 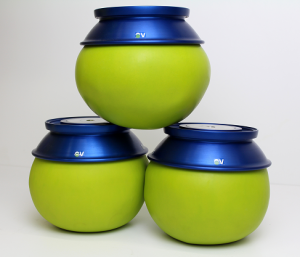